OUR LADY QUEEN OF APOSTLES - Saturday After Ascension 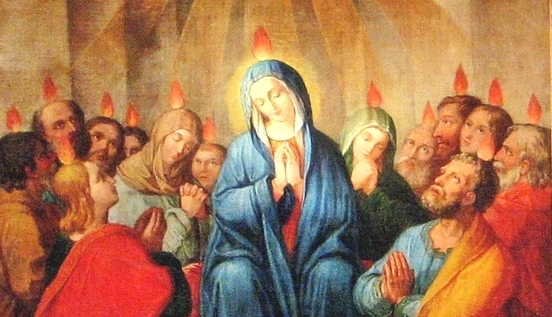 Mary is Queen of Apostles because she was chosen to be the Mother of Jesus Christ and to give him to the world; she was made the apostles' Mother and our own by our Savior on the cross. She was with the apostles while awaiting the descent of the Holy Spirit, obtaining for them the abundance of supernatural graces they received on Pentecost. The most holy Virgin was and always will be the wellspring for every apostolate.

She exercised a universal apostolate, one so vast that it embraced all others. The apostolate of prayer, the apostolate of good example, the apostolate of suffering--Mary fulfilled them all. Other people have practiced certain teachings of the Gospel; Mary lived them all. Mary is full of grace, and we draw from her abundance.
Mary attracts the zealous to the various apostolates, then protects and defends all these works. She sheds on each the warmth of her love and the light of her countenance. She presented Jesus in a manner unparalleled throughout the ages. Her apostolate is of the highest degree--never to be equaled, much less surpassed.

Mary gave Jesus to the world and with Jesus came every other blessing. Thus, because of Mary we have the Church: "Mary is the Mother of the Church not only because she is the Mother of Christ and his most intimate associate in 'the new economy when the Son of God took a human nature from her, that he might in the mysteries of his flesh free man from sin,' but also because 'she shines forth to the whole community of the elect as a model of the virtues' (Lumen Gentium. 55, 65). She now continues to fulfill from heaven her maternal function as the cooperator in the birth and development of the divine life in the individual souls of the redeemed" (The Great Sign, by Paul VI). What do we have of value that we have not received through Mary? It is God's will that every blessing should come to us through her.

Because the Blessed Mother occupies a most important position in God's plan of salvation, all humanity should pay homage to her. Whoever spreads devotion to the Queen of Apostles is an apostolic benefactor of the human race, because devotion to Mary is a treasure. Blessed is the person who possesses this treasure! Mary's devotees will never be without grace; in any danger, in every circumstance they will always have the means to obtain every grace from God.

Several religious congregations practice devotion to Mary under the title of Queen of Apostles, including the Pallotines, the Marianists, and the congregations founded by Bl. James Alberione (the Society of St. Paul, the Daughters of St. Paul, and several others). In the twentieth century, Bl. Alberione promoted this devotion in a particular way.